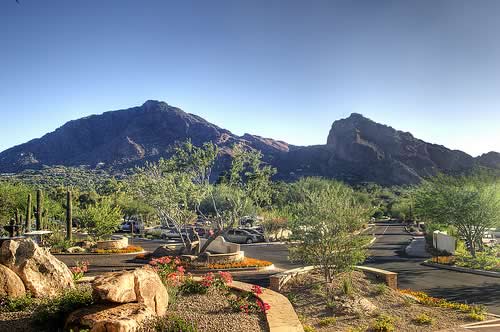 How would you like to go house sitting on the edge of an undeveloped desert, surrounded by majestic mountains, in urban villages with a long, colorful history? Then you’ve got to set your sights on Phoenix. The capital of Arizona, Phoenix is the city with the sixth largest population in the United States. Located in the Valley of the Sun on the northern edge of the Sonoran Desert, Phoenix is also the site of many parks, venues for the performing arts, museums and sports franchises.

Built around 700 CE by the Sinaqua people even before Columbus set eyes on America, these are well-preserved cliff dwellings of five stories holding 50 rooms. There’s a museum about the Sinaqua displaying the instruments they used to build the dwellings. You’ll find many artifacts like stone tools, bone needles as well as shell and gemstone ornaments attesting to the skilled artisanship of this ancient tribe.

A 57-hectare botanical garden, it now has over 21,000 plants with more than 100 rare or endangered species. The Garden houses plants collected from desert conditions of other countries in an Australian Collection, a Baja California Collection and a South American Collection.

Looming over Phoenix at more than 2,700 ft. above sea level, the mountain gets its name from the granite hump that is much older than the layered sandstone making up the head. A challenge to serious hikers, Camelback Mountain lures thousands of them every year. Small animals and plants typical of the Sonoran Desert can be found along mountain trails.

The largest museum for visual art in the US Southwest, it displays international exhibits in a 26,500 sq. m. area. Here you’ll find modern and contemporary art, as well as fashion design in its more than 18,000-piece collection of American, Asian and European works. It’s also a community center which stages festivals, live performances, art films and educational programs all year round.

Located along a classy stretch of East Camelback Road, this is the city’s luxury shopping and dining area. Stores sport famous signs like Macy’s, Ralph Lauren, Escada, Apple and Saks Fifth Avenue. Restaurants offer you a variety of menus to enjoy right in the middle of a historic and opulent neighborhood.