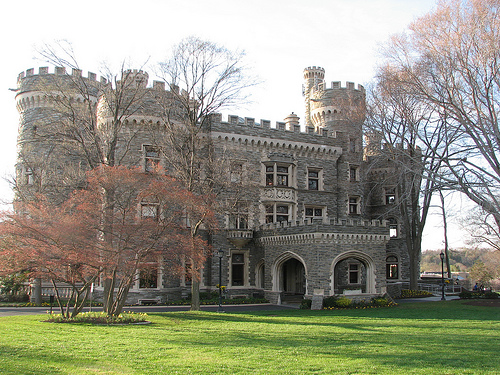 Say “castle” and you normally think of Europe not the USA. But did you know that there are a number of colorful castles right in America’s own backyard? If towers and moats are your thing, here are some that should satisfy your medieval tastes while you’re house sitting.

Grey Towers Castle is part of Arcadia University in Pennsylvania. It was built from 1893 to 1898 by William Welsh Harrison, a sugar refiner, using Alnwick Castle in Northumberland as a model. It has 40 rooms replete with gilded ceilings, hand-carved woodwork of walnut and mahogany, tapestries and ornamental paintings. And, of course, you’ll find secret passages and underground tunnels.

The only “true” palace in the USA is ‘Iolani Palace in Honolulu – the official residence of Hawaii’s monarchs. Built by King Kalakaua in 1882, it is a coral block structure of limestone and served, through the years, as headquarters of the various governments of Hawaii. Restored starting in 1969, the palace has a throne room, grand hall, private suites and plenty of koa wood.

On the Gloucester coast of Massachusetts you’ll find Hammond Castle. Built from 1926 to 1929, it was the home and laboratory of John Hays Hammond, Jr. the inventor of radio control, now widely used in airplanes, tanks and RC cars. The building blends the styles of the 15th, 16th and 18th centuries, featuring a great hall with magnificent rose windows and a courtyard with a wine merchant’s house transferred from southern France.

Fonthill Castle in Doylestown, Pennsylvania was home to archeologist and tile maker Henry Chapman Mercer. Built in 1908 – 1912, the castle has 44 rooms, more than 200 windows, 18 fireplaces, 21 chimneys and 10 bathrooms. The collection in the building includes cuneiform tablets from Mesopotamia that are from 2300 BCE, about 1,000 prints from Mercer’s collection, and more than 6,000 books. The 60-acre property also houses the Mercer Museum as well as the Moravian Pottery & Tile Works.

You’ll enjoy exploring these castles of the USA, and many more, at a leisurely pace if you get a house sitting assignment in these places. Aside from saving on hotel and lodging expenses, house sitting will give you plenty of time to roam the castles’ halls in your free hours.